SHALL WE CAPTION HIM? XD

here's our rule post.....i'm typing one handed, can you tell? my cubital tunnel is killing me! left arm aches and hand is partially numb....uh, not good...need to rest it!

1. you must at least put 'contest' in the subject line for your entry...

3. all regular vintage ads apply EXCEPT only one ad per entry...

4. VOTING: voting is a YES in the comments.....and yes, here is video i made awhile back as a refresher to help y'all remember how to vote!

6. hem and haw rule....this cubital tunnel fucking sucks...didn't bother me all winter, then about 20 minutes of pressure on my elbow and it all came back....trying to give arm rest and put zero pressure on my elbow, which that part is easy, but it's to do things one handed....ugh.....nice today...gonna go out and call for toads to come out of hibernation cuz i'm insane that way.....

I loved Quisp and Quake as a kid; I did order a few boxes of Quisp online a few (probably more than ten) years ago, but I see it's still available:

There are a ton of Canadian Club ads in the LIFE archive. They run from 1937 to 1947, and they went through a few different campaigns in this time, all focused on adventure travel. I pulled this grouping together because of the hilariously bad fake photo settings they have in common. I put the stuffed llama one at the top because every time I see it, I just have to laugh. 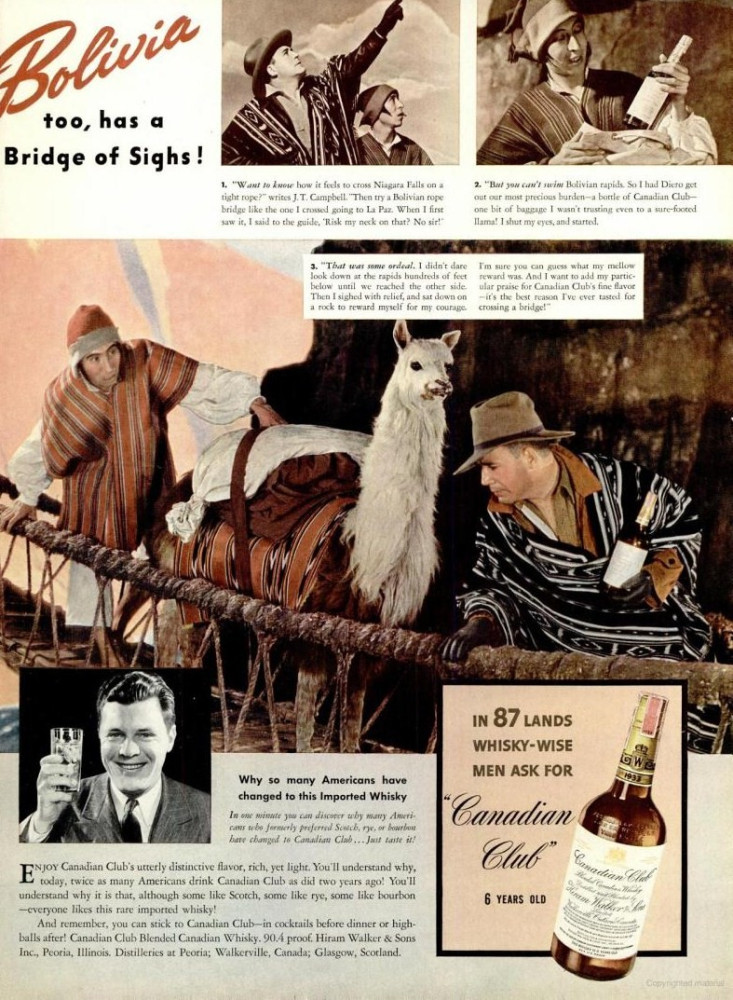 Okay, a bit of background.  In the early days of pre-sweetened cereals, one recurring issue was what might be called "adhesion":  the grains of cereal tended to clump together in the box, particularly after it was opened.  The Post company was the first to overcome this, with the first sugar-coated cornflake cereal, Corn-Fetti (sometimes marketed as Sugar Corn-Fetti).

The product was, shall we say, not precisely a rip roaring success.  The only way to stop the flakes of cereal sticking together was to give them a hard, candy-like coating which did indeed keep them crunchy, and something surpassing crunchy, in milk.  (Such descriptive phrases as "shards of glass" turn up with distressing frequency.)  Post immediately pulled Corn-Fetti from stores and began an immediate reformulation project.

Giving Kellogg's time to develop a sweetened cereal of cornflakes coated with tiny crystals of sugar, giving them a glittering appearance.  A sort of ... sugar-frosted flakes.  Stir in a spoonful of Thurl Ravenscroft and serve it forth.

(Is there a tag for "product no longer exists", or "extinct product", or something of the sort?)