Zellers advertisement in the Toronto Star for its 1931 grand opening in Toronto. The announced location later became part of the Toronto Eaton Centre.

The company was founded in 1931 by Walter P. Zeller as "stores for thrifty Canadians". The chain began with the purchase of the fourteen Canadian locations of American retailer Schulte-United, all of which were in Southern Ontario. Almost immediately, Zellers initiated an aggressive expansion strategy. Within 25 years, Zellers operated 60 stores and employed 3,000 people.In 1952, in a move to expand into Atlantic Canada, it acquired the Federal Stores chain of variety stores, adding more than 12 new Zellers locations.

This was in the Camden, NJ Courier Post on November 5, 1964.Two Guys was on the rise in those days. They were opening many stores in NJ and NY. They had separate stores for Department Stores, Food Supermarket, Home Improvement Center and Auto Service Centers.

These are very pricey gift ideas. Those are some righteous bucks for the day.

The lunch counter at this new Erie, PA location on Liberty Street had 21 seats, and you could get a banana split for a quarter, a hamburger for 50¢, a hotdog for 15¢, hot chocolate for a dime, or a cup of coffee for 7¢.

You could also buy a parakeet for $2.27, a gold fish in a bowl for 37¢ or a blouse for 97¢. The store also had a curtain department and a wrought iron department.

Woolworth's still had two locations in Erie, Pennsylvania in 1994, one in the Liberty Plaza (3622 Liberty Street) and one at 818 State Street in downtown Erie. Both of these stores closed in early 1994.

Country Life in America, August 1907, outside back cover

Country Life in America, April 1907, outside back cover

Country Life in America, October 1907, outside back cover

Hope it's OK, I included the front cover of this one, cause it's kinda pretty.

This was definitely NOT a magazine for farmers, despite the copy on the front cover. Just inside is a full-page ad for Tiffany's.

1940 ad for Oakland-based Capwell’s Department Store. Sorry, this is as big an image I could find: 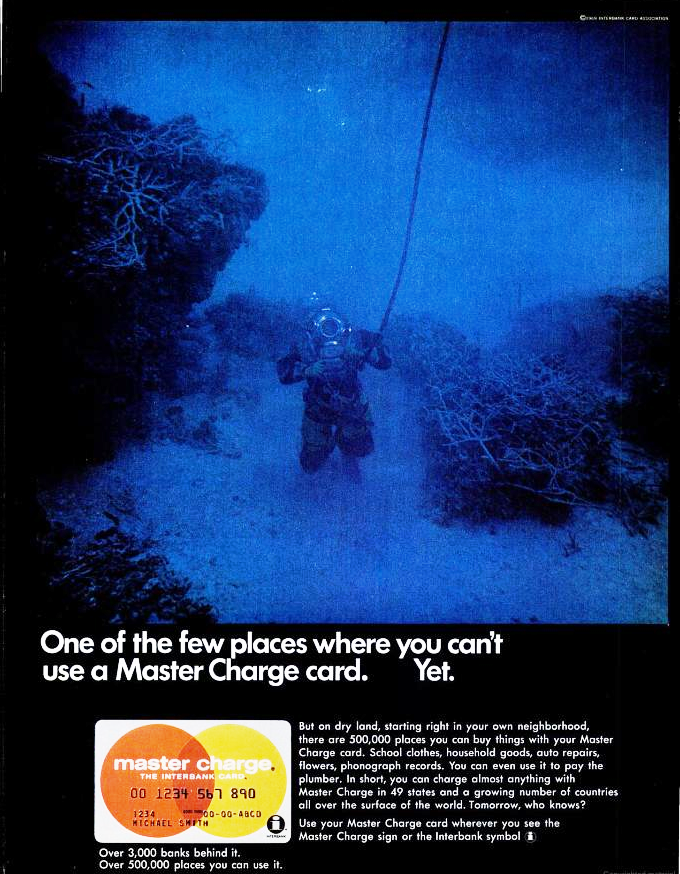 "Pin a dollar to the coupon" :D

This appeared in the March 26, 1967 issue of Time Magazine. Get a Pink Card for her!

The American Express Card. Don't experience accidental death and dismemberment away from home without it.

Cost of the cruise is little more than the cost to stay at home. $1500 and upwards...