Today is the 67th anniversary of the start of the Korean War ("Isn't this where we came in?" "It's even Sunday morning!"). And it was a Sunday that it began, as the film's dialogue attests. I am your guest host for this event..

One Minute To Zero stars Robert Mitchum and Ann Blyth in a film released in 1952, with a year to go in the Korean War. A mix of flag-waving and gritty realism, the movie is most noteworthy for actual combat scenes and a controversial scene involving Korean refugees. Howard Hughes, the owner of the studio (RKO), refused to delete the scene when requested by the U.S. Army.

25 Sunday ONE DAY EVENT: Korean War Veteran's Day. Any ad from the period of the Korean War. This war, and it's veterans, is often overlooked.

Many thanks to our guest host

bradygirl_12 for our Korean War Veteran's Day. We do this event, now yearly, because as she said, the Korean War is quite often forgotten. Sandwiched between WWII and the Vietnam War, it's just a blip in many history books and the veterans are also overlooked. Whether it be 6 months, 6 years, or 3 years, as the Korean War was (1950-1953), it should not be overlooked, nor should any veteran who served be forgotten. 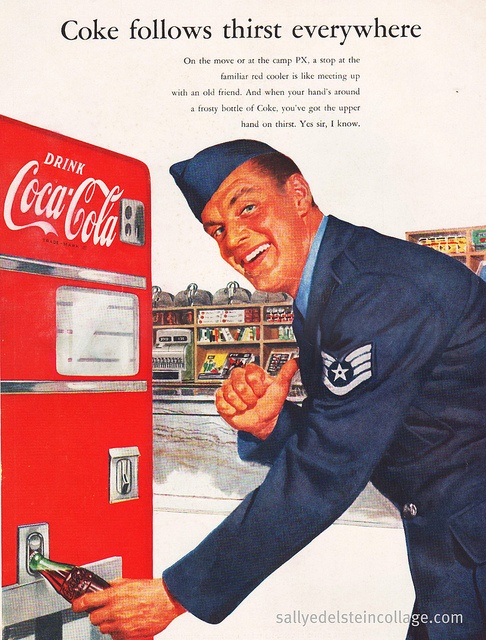 That ad, for some reason, automatically reminded me of this scene from Dr. Strangelove.

A reminder will be posted a day before each event

28 Wednesday ONE DAY EVENT: Reptiles. Ads that have reptiles

Something a little different. To give you the lowdown on The Steel Helmet, Ben Mankiewicz and TCM introduces the movie. A gritty movie with startling starkness, as the film was released only six months after the start of the war.

As the film opens, veteran Sergeant Zack is seen crawling away as the only survivor of his squad (executed by the North Koreans). The hole in his helmet is proof of his luck, though this World War II vet is suffering from PTSD (known then as battle fatigue). Trying to get back to his lines, Zack meets up with a Korean boy he dubs Short Round (the inspiration for the boy of the same name in Indiana Jones & The Temple Of Doom) and a patrol also trying to get back to American territory.

The film includes scenes of an unarmed North Korean prisoner being shot (which infuriated the U.S. military), and frank discussion of race relations back home (black and Japanese). While the modern civil rights movement wouldn't get its catalyst until Rosa Parks refused to give up her seat on that Montgomery bus for another four years, the Army was struggling with integration as ordered by President Harry Truman. Neither scene is the focus of the film, but they are startling considering that the war was currently raging and race relations were just not addressed very often by Hollywood.

The Korean War produced its share of flag-waving films, but more often the movies were grim, gritty depictions of war. World War II films were often intended as recruitment films. It was only after the war that war's futility and waste were addressed. Gene Evans is stellar as Sergeant Zack.

This film is considered one of the best war films of all time.